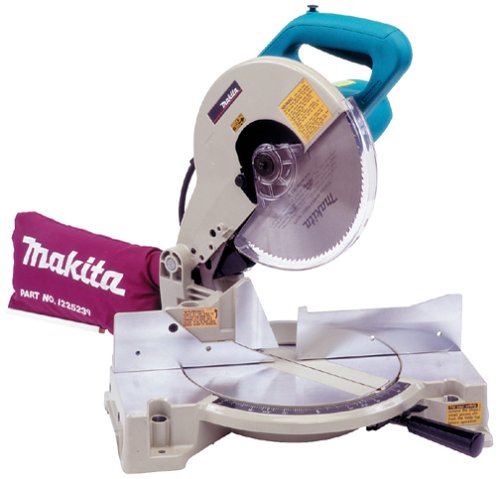 As compared to other miter saws that are leading in the market, one should surely consider this compound miter saw from Makita. It is much durable, highly reliable and it is able to make perfect accurate and angled cuts. Truly, this miter saw not only boasts of accuracy but it also guarantees safety as well.

This product has a very durable blade that enables to cut even the hardest board or wood material. It even ensures safety because of its 9 miter stops and that its motor is highly powerful also. You don’t have to worry much about it being too loud to function.

There are still some slight negative feedbacks to note in this product. Unfortunately, this product only have limited additional features which should have been better for a miter saw.

A lot of people may be finding the best miter saw in the market. And unfortunately, the choices can be too overwhelming. Thankfully, the manufacturer Makita makes things easier for us. Makita considers itself to be one of the leading companies that specialize in providing the best power tools, miter saw to be more particular, and it has never failed its market ever since.
Now, this tool Makita LS1040 10-inch Compound Miter Saw is that one tool in which it can surely cut through any type of wood, no matter how strong or thick it would be. With regards to other materials, one would surely have no trouble at all when one would use this product. Surely, cutting would be very easy and it can cut with smooth precision.
Makita is keen enough in having the capacity to cut easily through both left and right directions. It is also powered with a motor feature of 15 amp. Furthermore, it is lightweight and as compared to other miter saws, this miter saw from Makita should be much lighter and more compact. With a weight that is only around 33 pounds, any cutter will find it so much easier to cut any woods even with repetitive successions. 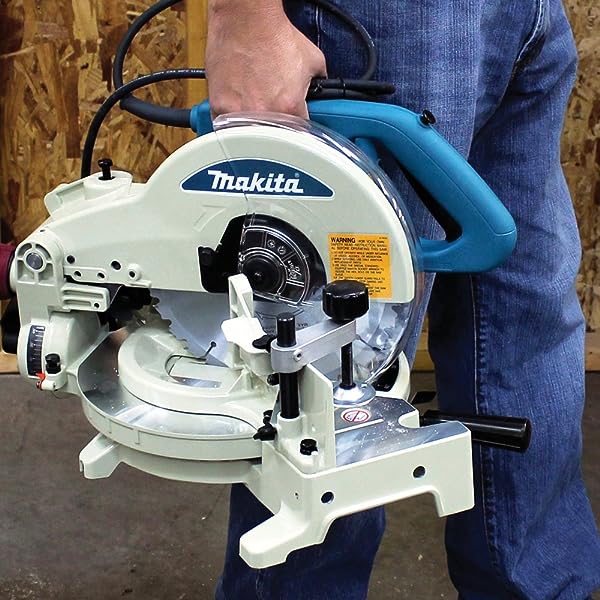 It is quite unfortunate that most people would rather use the conventional saw every time that would be planning on making any form of carpentry works in their home. True, the conventional saw will be able to do the job but remember, one may be able to finish the job but then again the manner as to how it is being done may have been facilitated hastily and without the much accuracy and precision that it need.
Thus, this should be the best possible time in which one would be able to choose this miter saw from Makita which will definitely provide the solution to their problem. The Makita LS1040 10-inch Compound Miter saw has already been known to provide the smoothness of cuts which would be highly accurate and very much made to its perfect precision.

Advantage of Using This Product

While it may be true that the general features of a miter saw may be similarly same to all miter saws, one should consider that there is a better edge if one would rather choose this miter saw from Makita apart from all the rest.
The following have been considered to be the main advantages of this product. This makes this miter saw to be highly preferred and highly used by its market.

One may be easily lead away to its very cheap price as compared to other miter saws and its lightweight design, but you can very much rely also on its blade of 10 inches that has the ability to make some great cuts which ensures precision and sharpness.
In fact, such blade of the Makita LS1040 10-inch Compound Miter Saw has the capacity to cut even on the largest kinds of wood. In addition to this, you can even do some great miter cuts and bevel cuts which this kind of saw. Knowing further that this is a compound saw, you would also be able to use this as your primary saw. 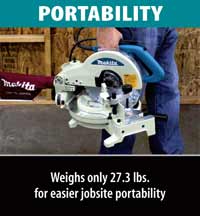 When it comes to the safety features of the miter saw from Makita, you would be able to find out that the weight alone of this saw is very portable as it is only 27.3 pounds. Thus, this allows easy carrying and does not pose risk every time this will be carried by the users of the product.

You can very much rely on this product. It may be very light and it may be very portable but the thing about this miter saw is that it can be carried by contractors from one site to the other given that such large scale project is being done on a day to day basis. And given the fact that it is done daily, it would give them the much needed convenience on the fact that they don’t have to struggle with its weight every time they carry it wherever it is being needed. 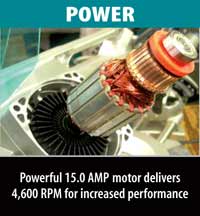 The motor of this miter saw is powered with 15 amps. Moreover, it enables to make the ultimate performance for a no load routine at 4600 RPM. It has a unique DD motor system or a direct drive motor system that runs very quietly and smoothly every time it starts to function.

This is the very reason why a compound miter saw is highly appreciated as compared to a single miter saw. With the use of the Makita LS1040 10-inch Compound Miter Saw, one would be able to cut through its blade at a particular angle which can either be geared to the left or right. This is meant for those bevel cuts.

The following are known to be considered as the main features of the saw, they have been known to make this miter saw the most highly sought after miter saw among construction workers, wood workers and the like. Surely, its features are being especially built in order to make sure that such miter saw will only provide nothing more but the best convenience and the highest function ever.

One of the best features that consider a miter saw to be of highest quality is that it should be able to make accurate cuts with such smooth precision. And while it is being cut, the said saw should not move. It is because should there be even just the slightest movement; one would not be able to achieve its desired quality. The material clamp and the support of this bevel saw ensures that there will be no hassles that may happen during the duration of the use of the miter saw.

One should know that the entire length of the saw has a very durable support through its two posts. These posts guarantee its utmost durability and at the same time it also offers firmness. It also has a pivoting neck in which one would be able to make the blades of the miter saw move about into various angles. Such will also allow easier cutting of bevels.

The best thing about the dust collection feature of this product is that it is able to capture a total of 75% of the total dust that is generated during cutting.

In order to really be able to perform what it should suppose to do, this product is equipped with a 15 amp and that because of the quality of its amp, one would surely not have trouble as to how this will run smoothly on wood platforms.

It is of this reason why safety is one of the main features of this miter saw. One should know that it is only unique to this type of miter that it is able to maintain a 9 positive miter stop. It particularly has a stop feature on degrees 15, 30, 22.5, and 45 both on left and right angles.

Since this is a compound miter saw, one should know that this item is meant for various different cuts. Whether you are into compound cutting, or cove moldings and even cutting crown, one would surely be able to achieve those cuts with this handy tool

Who Needs This Product

The Makita LS1040 10-inch Compound Miter Saw is great for different kinds of workers and craftsmen who are keen on making projects, DIY jobs, or even artwork from all things made of wood or any related material thereof.
If you can see that there are a lot of products that are made of wood which are being created with much precision in terms of its measurement, rest assured that it is the work of a good and effective miter saw such as this one from Makita.
Also, if you are currently having a project, whether it is DIY or any construction related project, any contractor or worker would be able to find this tool to be highly helpful and might as well make your work much easier.

While a lot of people might not so much really rely on this manufacturer as there could be a lot better supplier of miter saw than this one, one should not take this utterly for granted. It is to be noted that there has been a lot of users who have already testified as to how effective and powerful this miter saw is.
In fact, most users have been noted to be so happy and satisfied with this product that they are even surprised as to how great such miter saw has been doing so far. Indeed, Makita should never be belittled as it has a strong set of powerful and reliable miter saws to choose from.
However, the only thing that some users have observed in this tool is that it lacks more additional features as compared to other high quality miter saws. But then, that doesn’t mean that it would not be able to really do its function as it should. Still, its performance is above par.

The Makita LS1040 10-inch Compound Miter Saw has done a great job in providing its users and customers the best product that they can ever expect of a miter saw. It is even quite surprising that its features may be well regarded as that of the top market leaders in manufacturing miter saws.
All in all, this product is highly recommended for all your contractor needs. Whether it is a home improvement or any other related products, one should surely take a chance on this impressive miter saw.