Best Band Saw Reviews 101: What Are the Best Band Saws in 2020 and Where Do You Find Them?

A band saw or bandsaw is a continuous stationary saw that consists of a steel band (hence the name of the piece of equipment) with a serrated edge that moves and endlessly loops over wheels like a conveyor﻿﻿﻿ belt. Although this guide to buying band saws might not contain the end-all, be-all of band saw reviews, it still serves as a good reference for beginners on what to look for in such saws.

How to Choose a Band Saw 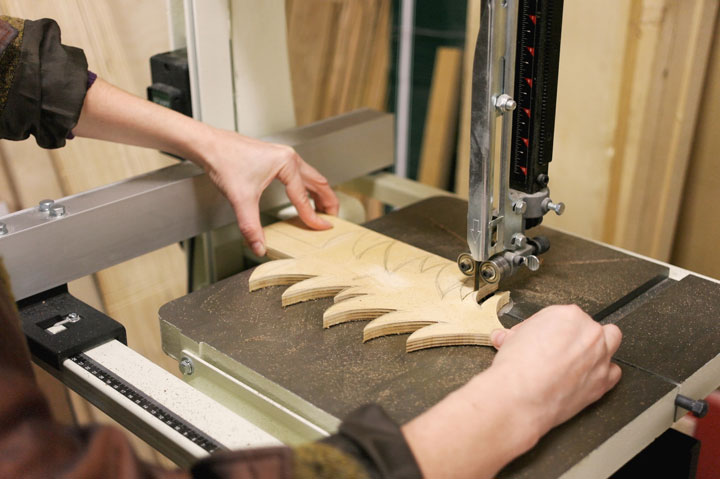 There are a number of things that come into play when choosing a band saw that's right for you and your woodworking needs. These include how big the motor is, cut depth, the width of the cut or throat, and the accessories you might avail of to improve its capabilities (among other things).

The cut depth is measured by the amount of material removed by the bandsaw in one pass. It's also the distance from the upper blade guides to the table. This band saw depth of cut can go from only 6 inches to all the way to 36 inches, depending on the size and grade of the saw machine in question.

The throat refers to the cut width. A band saw that's stationary should have a throat or width that goes 12 to 14 inches. If you have a cabinet model bandsaw on hand, expect the throat to go up way wider.

A band saw that's stationary is typically powered by an electronic motor (as opposed to a gas-powered one). If you have a bench-top type of bandsaw, then its motor ﻿﻿horsepower capabilities can go from ¾ of an HP to 1 HP. The bigger the stationary band saw, the larger the motor to keep up with its size.

The more sophisticated band saws out there have variable speeds, allowing you to precisely cut different wood types and grades perfectly every time or slice apart smaller material pieces. You need a slower instead of faster motor speed to efficiently cut through metals or hard plastics.

Band saws are available in a wide range of sizes. The bandsaw size is represented by the pulley diameter, while the material width that could be cut is constrained or controlled by the distance between the frame and the blade. In simpler terms, the material to be cut cannot be bigger than the size of the saw itself.

This distance could be as low as ¼ of an inch to ¾ of an inch less than the size of the pulley. To illustrate this discrepancy, let's say you have a 10-inch band saw. You should then expect it to handle material up to 9⅝ inches wide. Meanwhile, 13¾ inches is what a 14-inch saw can handle in turn.

The accessories used for band saws are mostly those that assist in making sure ever cut is straight and level or perfectly measured. That's where the rip or ripping fences and miter gauges fit in. They also allow for more complex operations than straight cutting like ripping, resawing, and crosscutting.

Just remember that without these accessories or even with them, a radial arm saw or a bench saw can probably do those cuts more adeptly than the bandsaw. The band saw table—which is made of cast-iron, steel, or aluminum and has the average size of 16 by 16 inches—should also be able to tilt about 45 degrees to allow for angled or mitered cuts.

Uses for a Band Saw 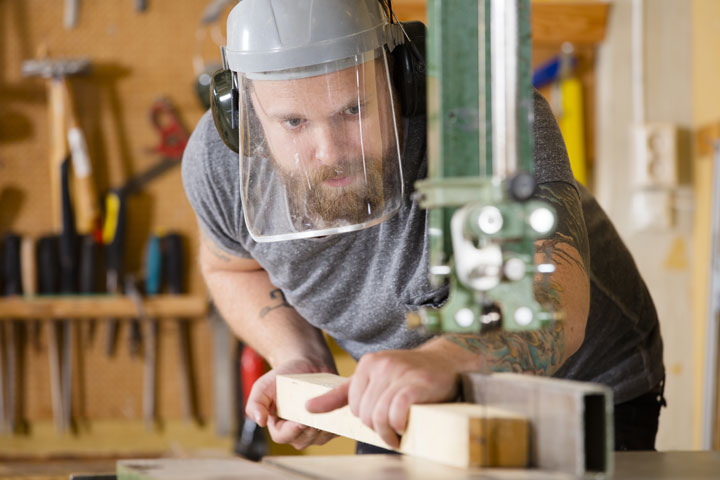 The band saw can be used for a variety of applications and by several industries (particularly those mostly related to woodworking, but the tool also covers metalworking and construction work).

How to Use a Band Saw Safely

Here are five quality band saws you can choose from.

If you want a band saw you can depend on for straight and accurate cuts, then the SKIL 3386-01 2.5-Amp 9-Inch Band Saw might be for you. It includes an LED that you can articulate and use to shine onto your work piece to better see where the bandsaw will land and cut without you putting on a hardhat with a light on it or turning on a flashlight. What's more, the SKIL 3386 also includes a 1½-inch dust port to collect all the dust and keep your work area as immaculately clean as possible so as to assure easy cleanup and keep the sawdust or particles from obscuring your work.

Angle and height adjustments can also be dealt with through the rack and pinion table adjustment feature. Meanwhile, the motor isn't variable speed but only 1-speed so that it can cut metal or wood materials easily and equally. Naturally, some people might have an issue regarding this non-variable speed in terms of versatility, but whether this will become a problem with you or not ultimately depends on what you're going to use the SKIL 3386-01 for. If it's just for wood crafting projects or metalwork cutting, that one speed is fine enough for most needs.

As for the Delta 28-400, it's full of features for any woodworkers or metalworkers who wish to get their bandsaw complete with all the trimmings and accessories. This 1-HP product includes a TEFC motor with two speeds (one more than the SKIL 3386-01), a heavy-duty steel frame design that reduces blade flexing, two-speed pulley, aluminum "trunnion" table support with a professional finish (which some customers might approve of), and an easy tensioning system. The machine can specifically go as slow as 1,620 FPM (standard speed) and 3,340 FPM (heavy-duty speed for nonferrous metal and hardwood cutting).

The Delta 28-400 14 in. 1 HP Steel Frame Band Saw also caters to workers who don't want to waste their time with blade tracking and adjustment by offering aluminum and rubber-coated upper-and-lower spoke wheels (all 9 of them) that are balanced with machine or assembly line precision. This is known to be more European-styled in its design, which means that the Delta 28-400 has a more powerful standard motor than American-styled bandsaws (a whole horsepower is better than a third of one), has an improved run-out adjustment, and an extra-large table for easier cutting of big work pieces, and a well-placed dust collection port.

Although the Craftsman 1/3 hp 3.5 amp 10 in Band Saw has less of an HP to work with compared to the Delta 28-400 (⅓ HP versus 1 HP), it nevertheless services its niche or demographic cross-section of customers by offering a 3.5-amp continuous duty motor that's been designed to last a long time. It also offers throat and depth of cut stats for those who wish to saw through anything with a cut depth of 4⅝ inches and a throat depth or cut width of 9⅝ inches. To be more specific, if you want to through work pieces with fewer passes from you bandsaw, then this Craftman offering might be for you. It's a product you can depend on for curve and straight cutting wood of varying thicknesses in accordance to its throat and depth of cut size.

However, it requires some assembly, which is a drawback compared to other band saws that come in one piece. It's a relatively versatile band saw with a highly controlled cutting capability that you can make custom electric guitars with it. Rather than depend on a jigsaw for your curved and irregular pattern cuts, you should instead get something like the Craftsman 1/3 hp 3.5 amp 10 in Band Saw to make machine-perfect, assembly-line-like curved cut results with no burrs, no damage on the grain, and no cracks. It's also small enough to fit in limited spaces, like a garage with a 4x4 truck inside it. You don't have to wheel or forklift this piece of equipment into your house.

Durability is the name of the game for the Rikon 10-305 Bandsaw With Fence. If you want a band saw that can deal with heavy-duty or constant usage, then it helps that the Rikon 10-305 has a solid steel design. It's even smaller that its fellow Rikon brethren—the 10-325 and the 10-345—so that it can serve as the portable version of the popular Rikon bandsaw models. It can deal with bigger workload although it's a downscale version of its bigger siblings exactly because it's more compact and has a steel plate frame, which is obviously stronger than the plastic frames used by other band saws in order to cut down manufacturing costs.

Like the Delta 28-400, the Rikon 10-305 also has a relatively large cast-iron table work surface for a bandsaw of its portable size, measuring 13¾ inches by 12½ inches. Then you also have its rip fence that you can remove if you want to cut the work piece freestyle or that you can adjust if you want to repeat the same cut over and over across different work pieces. In terms of the guide post that allows you to position the work piece perfectly as it's sawed by the bandsaw blade, the Rikon 10-305 can micro-adjust the post by turning a handle. Like the Craftsman band saw, this Rikon band saw also uses a ⅓ HP motor. It's weaker than the 1 HP of the Delta 28-400 but it's strong enough to cut bowl and pen blacks.

The WEN 3962 Two-Speed Band Saw is comparable to the Delta 28-400 in terms of also featuring two speeds to allow for safe and variable cutting capabilities between different materials that are soft and brittle so they require faster cutting speed or hard and tough so they require slower methodical cutting speed with multiple passes. WEN 3962 also has a 3.5-amp motor that's capable of cutting at a throat of 9¾ inches and depth of cut of 6 inches. You can also change blades for more versatile cutting action, since you can fit blade sizes on it ranging from ⅛ of an inch to ½ of an inch in size, allowing for varying cut thicknesses and better cutting control.

The machine also comes with a work light you can use to guide the blade to the work piece and get a better view of what you're cutting in case you have an irregularly shaped material that's causing shadows to form and obscure your work. The table is pretty spacious as well, with the work table having a 14⅛ by 12½ inch size. There's also the fact that WEN 3962 can operate at speeds of 1,520 FPM to 2,620 FPM. It's a lower range compared to the Delta 28-400 bandsaw's 1,620 FPM and 3,340 FPM, but it works pretty much the same way give or take several FPMs. Only the Delta 28-400 is comparable to the WEN 3962 in terms of power and versatility. If you want to be extra intricate with your cuts while maintaining their smoothness, then WEN 3962 is the band saw for you.

A stationary bench-top or tabletop band saw is the tool you need if you wish for more accuracy and quickness in cuts compared to a handheld tool (it's also easier to use and won't tire your arms out as fast as a power tool﻿﻿﻿). When choosing which band saw to get, you should also be aware of your budget, the cutting capacity required, the material to be cut, and how often your saw will be used.